I have years of experience in several sectors, including journalism and marketing. My journalistic work has been recognized and awarded by professional state and national agencies. I am adept at project leadership, time management and delivering clear and concise content for large audiences. I am also equipped with design skills to ensure end products are visually appealing.

Temple student Jill Caldwell smiles as she looks at one of her peers holding up a sparkler at protest the night before President Donald Trump’s inauguration. | THE TEMPLE NEWS

Jonathan Thomas, who is blind in his left eye, uses a magnifying glass to assist him as he draws. | THE TEMPLE NEWS

A young girl waits to perform at a concert in the garden of Moffet Elementary School in Kensington during May. | THE SPIRIT NEWS

Volunteer Johnny Jones helps install the mural “14 Movements: A Symphony in Color and Words” on the median of Broad Street during July. | THE TEMPLE NEWS

A girl takes a photo of her father at a community event at Moffet Elementary School in Kensington during May. | THE SPIRIT NEWS

Adam Cramer stands in the shop where he has fixed vintage motorcycles for 15 years. | PERSONAL

A tattered one dollar bill hangs behind Darryl Salley’s desk at 1617 Barber Shop & Beauty Salon on Cecil B. Moore Avenue. It symbolizes the importance of building relationships over making money for the shop. | THE TEMPLE NEWS

Heather Birmingham sings a rendition of “This Little Light of Mine” at Temple Theaters’ Ghostlight Project the night before President Donald Trump was inaugurated. | THE TEMPLE NEWS 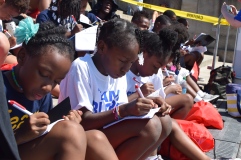 A group of girls participate in the organization Mighty Writers’ attempt to break a Guinness World Record during July. | THE TEMPLE NEWS 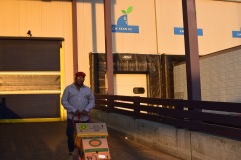 Dorin Collins grew up in North Philadelphia and tried her first cheesesteak at a shop on Broad Street near Diamond, seen behind her. The shop is now gone, and a fraternity stands in its place. | THE TEMPLE NEWS

Mat Tomezsko and volunteers install Tomezsko’s mural “14 Movements: A Symphony in Color and Words” along Broad Street’s median during July. | THE TEMPLE NEWS